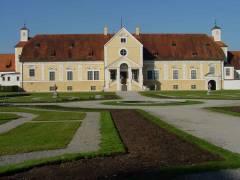 The first palace construction in Schleißheim was created from 1617 onwards after plans by court constructor Heinrich Schön d. Ä. (“the older”). Duke Maximilian I replaced his father’s rather plain manor with a stately palace complex that mixed domestic and Italian designs. The interior design was carried out by such distinguished artists as Joachim Sandrart and Peter Candid.

In this way, the construction comprising more than 200 rooms and a chapel (“Wilhelmskapelle”) became a major work of the early baroque period in Bavaria.

The reconstructed Old Palace is home to a branch of the Bavarian National Museum, holding the Weinhold collection (“Zeugnisse der Volksfrömmigkeit” – “Testaments of popular piety”) as well as an exhibition on East and West Prussian culture and history.