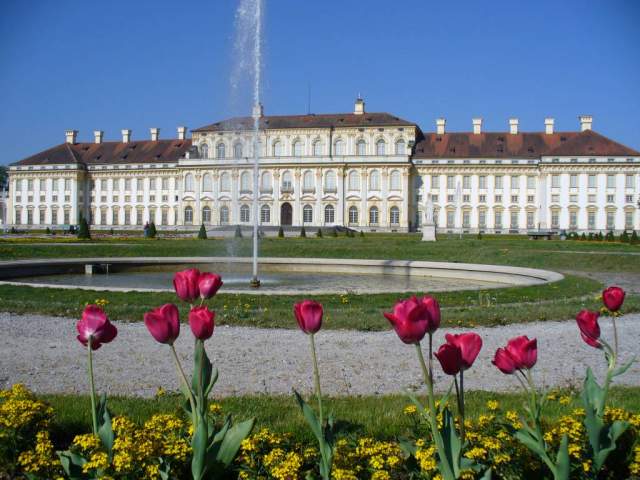 Following his appointment as Governor for the Spanish Netherlands in 1691, Elector Max Emanuel’s plan was to create a new residence palace in Schleißheim modeled after Versailles. Warnings of the high financial cost involved did not impress him. If anything, his plans took on even larger proportions. The time from architect Enrico Zuccalli’s first sketches to the laying of the cornerstone was marked by a constant changing of plans.

The building shell had not yet been finished when an accident at the construction site and the Elector’s banishment (1704-14) after his defeat in the Spanish War of Succession halted construction for the time being. It was not before 1716 that construction was recommenced under the direction of Paris-trained Joseph Effner from Dachau.

At the time of Max Emanuel’s death the main building was all but finished. Apart from the generously layed out staircase, the monumental palace complex comprises splendorous ballrooms and luxurious residence tracts whose interiors were furnished by renowned artists such as stucco mason J.B. Zimmerman and fresco painters C.D. Asam and J. Amigoni among others. The palace also houses The State Gallery of European Baroque Art, part of the Bavarian State Collection of Paintings, with works of international significance.